The "Sorry Brian" Tour - A Visit From Ireland

January 07, 2018
A few months ago I was contacted by Brian McCloskey after he saw some shots of Hawk Owl from Helsinki.

He put together a cunning plan for himself, Cathal Forkan and Joe Proudfoot to avail of cheap flights to the city.

There was just one snag...Poor Brian had some last minute college exams sprung on him, meaning he could not travel...and thus the Poor Brian tour was born.

On Saturday I took Cathal and Joe out west, starting off at a Black Grouse lek. I was somewhat worried that perhaps we were too early in the year. When we arrived the bog was silent with no snow present and it was looking a bit of a washout. We moved back into the woods looking for Hazel Grouse. We had barely moved more than 70 meters when we heard the bubbling calls of male Black Grouse coming from behind us. Back to the bog and there we found 3 cracking males sitting up on some stunted trees. 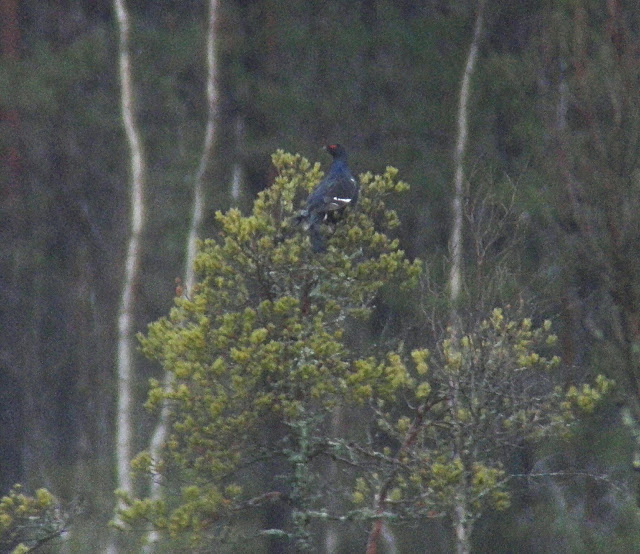 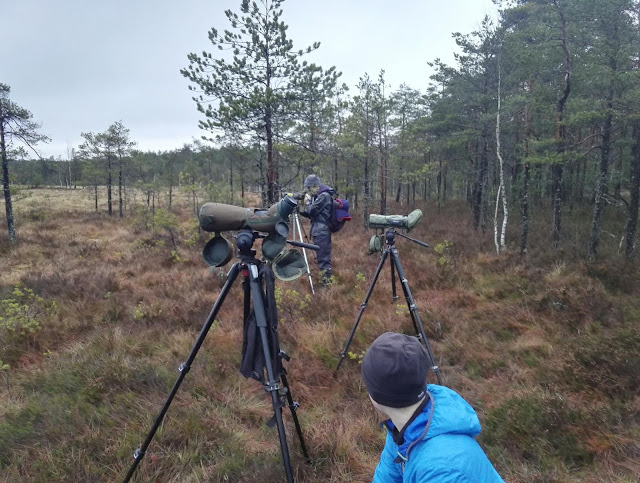 From here we moved back along the path but had no luck with Hazel Grouse. We heard a whistling Grey Headed Woodpecker, but he refused to show for us.

Further west again, in Siuntio, a quick stop produced the next lifers for the guys as we watched a few Smew in a coastal bay, temporarily harrassed by a White Tailed Eagle. 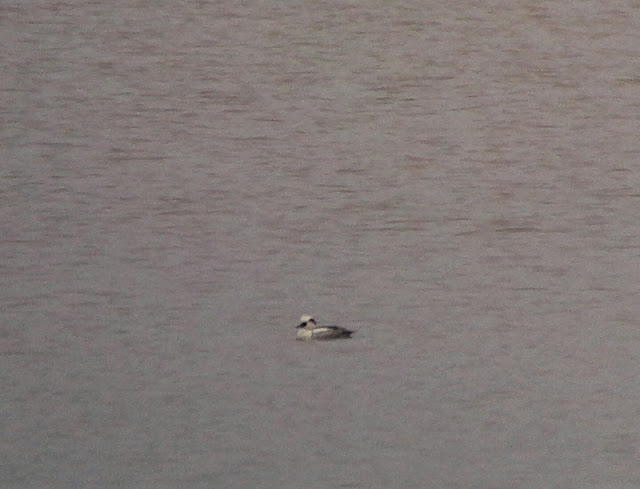 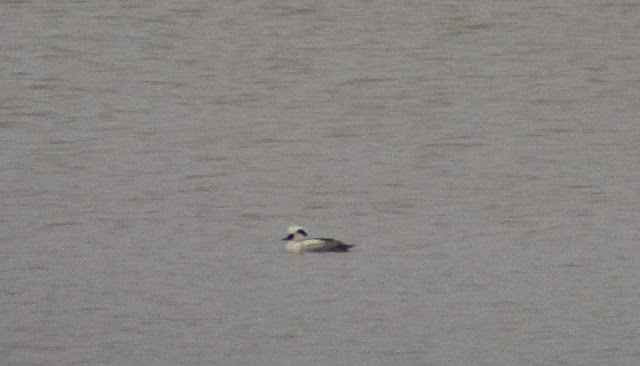 We carried on west into Inkoo where Joe asked "Is there much chance of coming across a Hawk Owl randomly?".

Five minutes later Joe had picked up a roadside Hawk Owl in a random location. 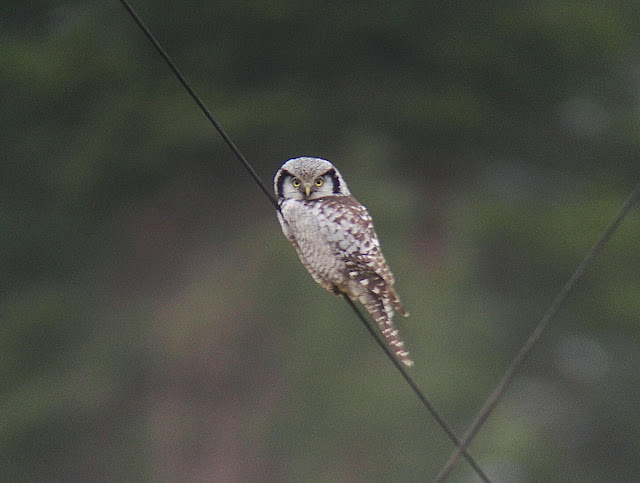 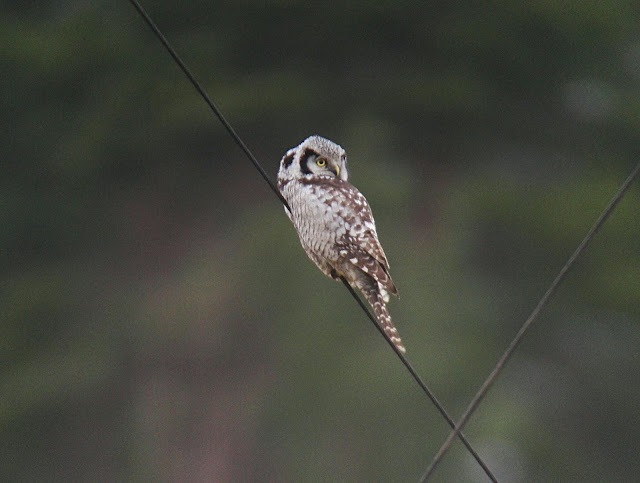 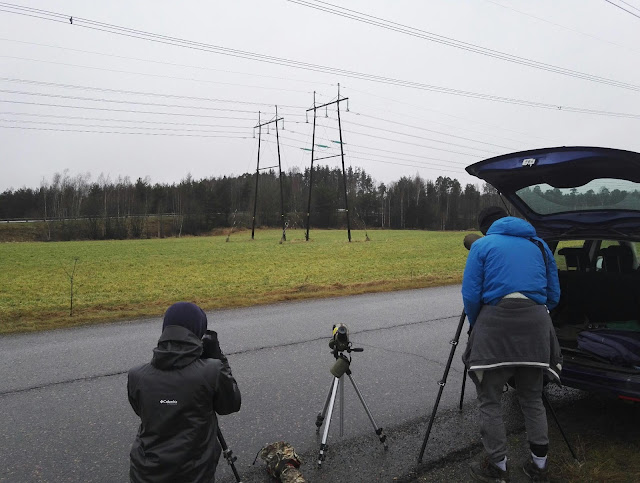 It was then on to the Next site where we easily picked up Willow Tit, Crested Tit, Northern Treecreeper and, of course, the Nutcrackers.

We received news that a Great Grey Owl was showing at Viiki and so we set off back to the city, seeing our first Goshawk, sitting on a street light, as we drove on the ring road.

We walked through the woods at Viiki and arrived to see an absolutely stunning, active and hunting, Great Great Owl.

This was easily the best individual I had ever seen, immaculate in plumage and completely oblivious to us, at one point flying right at us, pouncing on a rodent just five feet in front of me. Astounding bird! 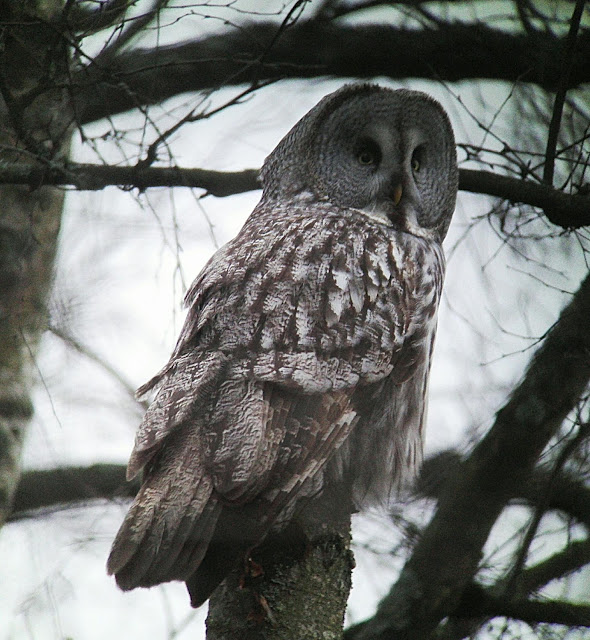 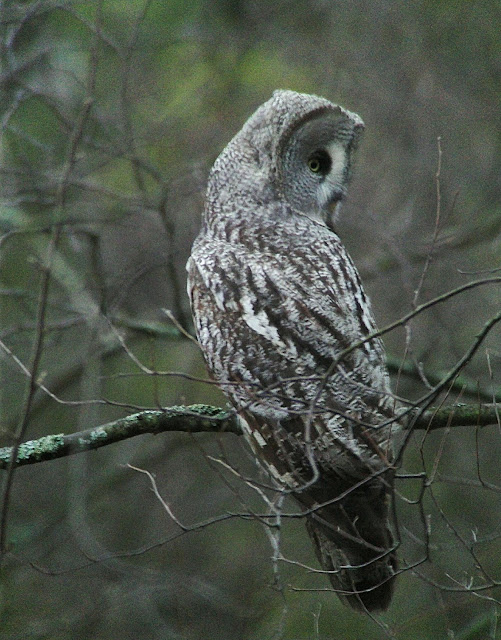 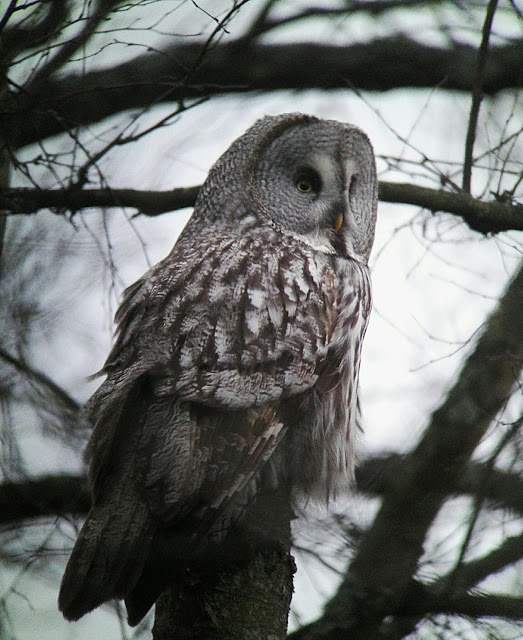 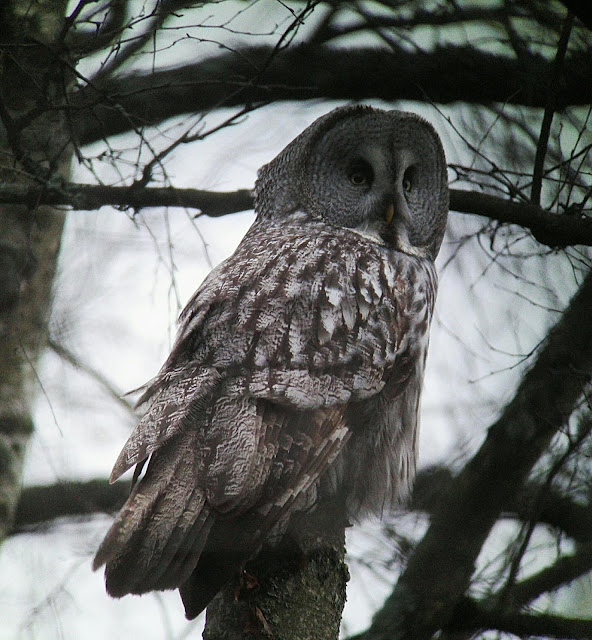 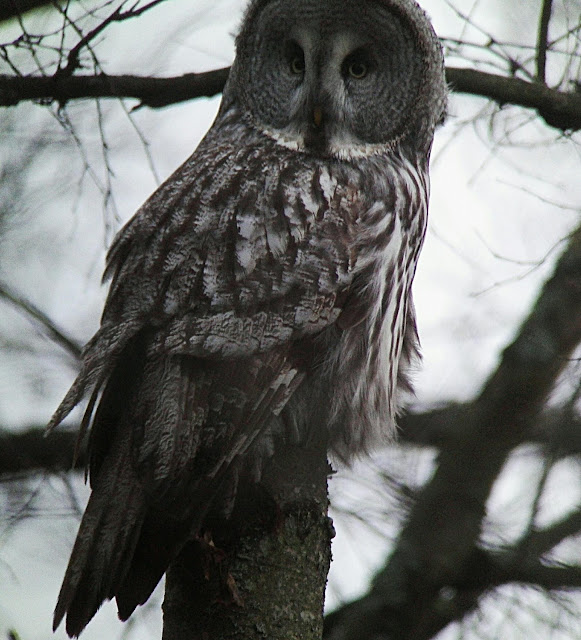 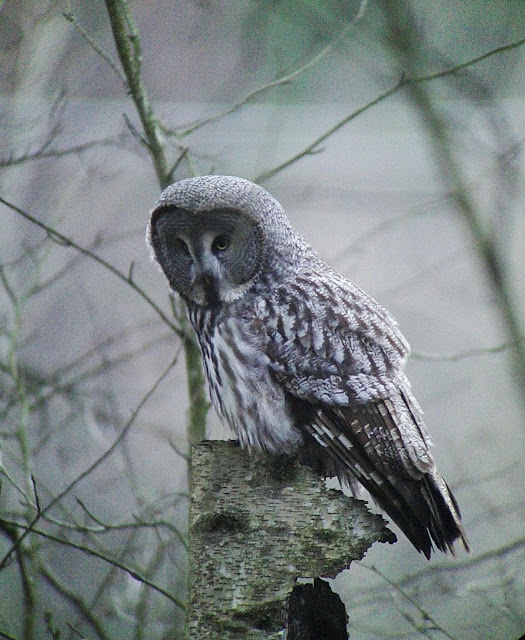 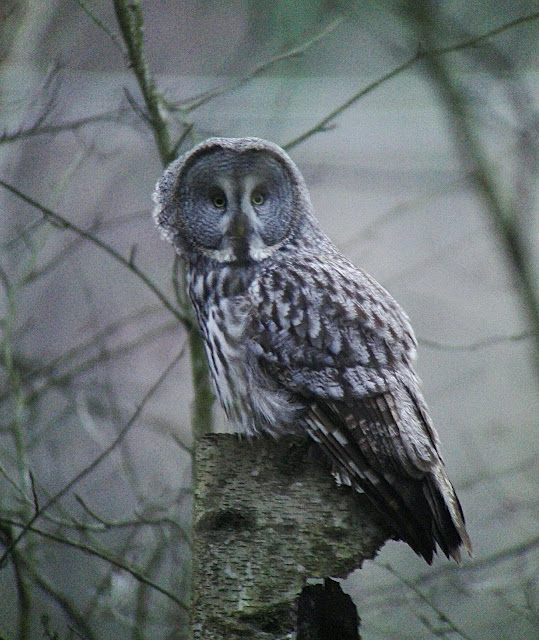 
On Sunday we headed east to Porvoo, arriving at Tolkkinen feeding station just after dawn. Several birders were already on site and we were instantly treated to good views of both White Backed Woodpecker and Pygmy Owl in quick succession. 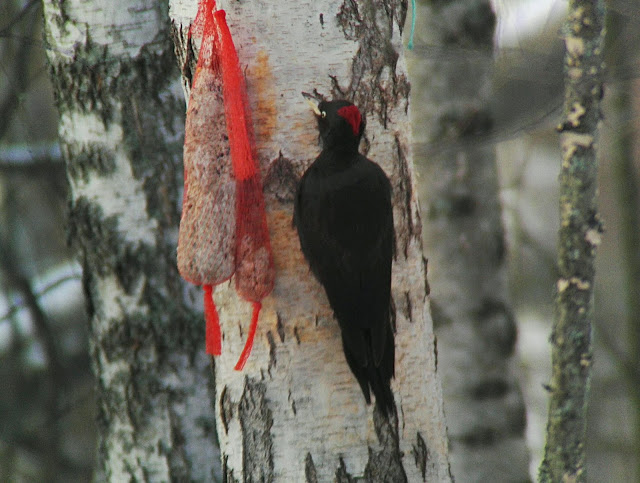 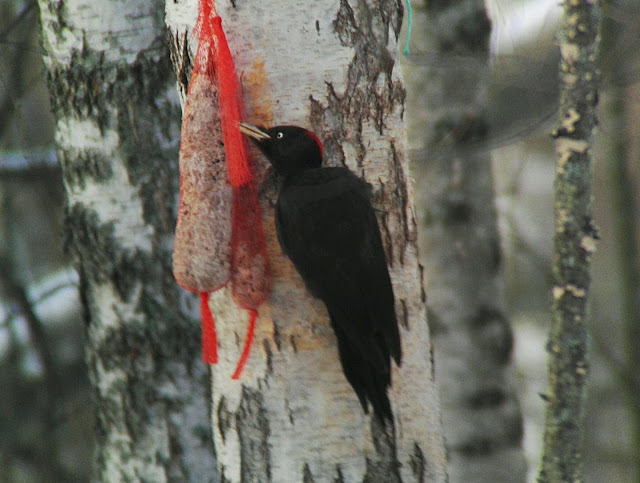 2 Black Woodpecker were also very welcome, but alas the hoped for Grey Headeds did not appear.

We then checked out a nearby wood for Ural Owl. Unfortunately this was a dense commercial plantation and viewing was not easy, but the lads did manage a couple of flight views of the Ural.

In nearby fields a long staying flock of Redpolls held all 3 types in it, and we were treated to a cracking view of a male Arctic, and a few more obscurred views of a couple more Arctics among the mealy and lessers.

A little up the road again we had brief views of a Rough Legged Buzzard on a pylon, but far superior views of another in fields by the motor way. 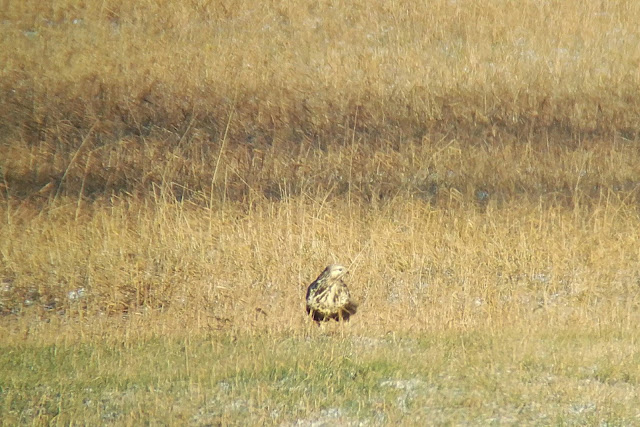 A Goshawk made it's way over these fields, giving good flight views and then it was back to Helsinki for the Eastern Black Redstart.

The redstart was even tamer than my last visit, and we arrived to find a ring of birders sitting in a circle in a ditch, whilst the bird hopped around their feet. 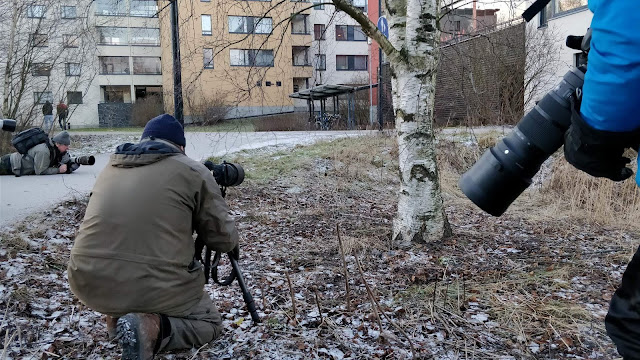 We then finished off the weekend on Viiki fields ticking off Great Grey Shrike for the lads, and enjoying good views of 2 Goshawks hunting and circling around the area, giving good experience views for the lads.

That was that for the guys, and their originally intended trip of nabbing Hawk Owl on a weekend city break, sees them head home with a goodie bag full of tickage. 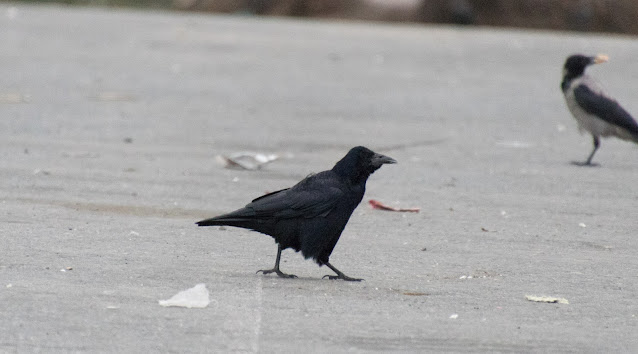 Back up at Hämeenkyrö this past weekend, which meant the usual visit to Tarastenjärvi. Things started out well, finding some decent scarce in the form of a Rook. Yes. A Rook. As I rounded a bend and presented with a mixed flock of Jackdaw, Raven and Hooded Crow, my attention was immediately drawn to the dark hoddie sized corvid. Result! Finding birds like this tell me I'm not overlooking things, even when it concerns Irish dross which I could be tempted to ignore. Why am I looking at crows? How else will I find that daurian? Gulls were a bit tough this time around, lazily loafing on rooftops for a change. No Caspian this time. It's been a poor season for Tarastenjärvi, with no juvs having turned up yet here (to my knowledge). The best in this regard was a few slightly more interesting Herring juvs. Baltics were also in lower numbers, many having already made their way south. Nice to see the plumage stage of the few juvs that were still present though. Juvenile Baltic Gull - thi
Read more 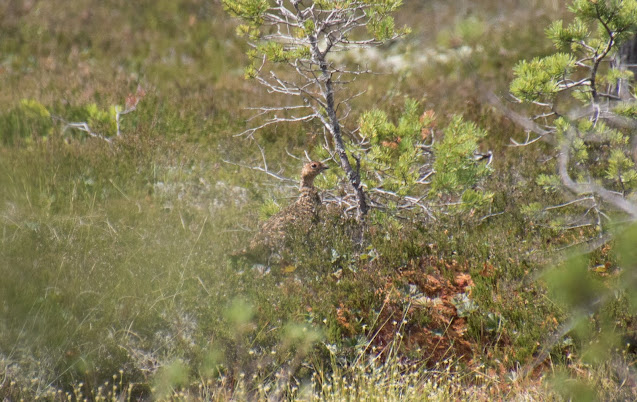 Another month without much time for processing photos, prompting some catch-up. After my success with finding a 3CY Caspian Gull, we made a family trip to some pristine bog land habitat. This was loaded with breeding Whimbrel, Golden Plover and we stumbled across a fantastic family party of Black Grouse. Black Grouse - female and one of many chicks. Back in the capital area, a visit to Laajalahti produced an abundance of waders and Caspian Terns. Osprey Caspian Terns - Behemoths Caspian Tern - Juvenile - look at those chevrons. The garden has continued to produce birds, including the 2nd Common Whitethroat of the year (of all things), not a common bird in our woodland setting. Wood Warbler, on the other hand, is a more typical species to move through the garden in August. The first full fat garden list tick, a pair of Common Scoter, were most welcome. Back up at Hämeenkyrö, another visit to Tarastenjärvi produced the usual excellent views of juvenile Baltic Gulls. Baltic Gull - juvenil
Read more 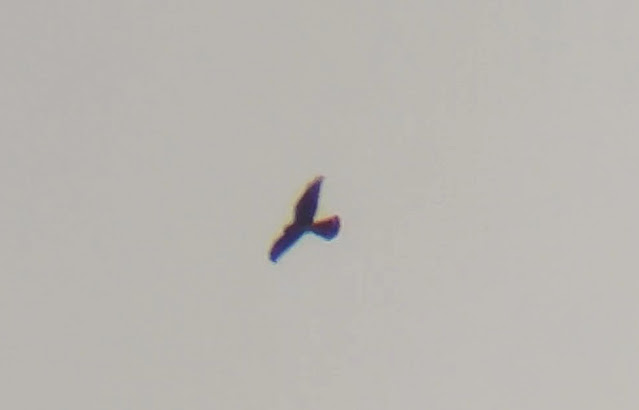 I've been continuing to search for Pallid Harriers now that we are in season but without massive success...except from my very own garden it seems. Pallid Harrier. Returning home from the morning kindergarten run, I decided to scan over the lake and was lucky enough to pick up a soaring juvenile Pallid Harrier quite close. Pallid Harrier - nice and slim I ran back to the car to grab my scope, but upon my return to the lake, the bird had moved to the far side of the lake. Nonetheless, I had good prolonged views as it made it's way East. I've been birding Siuntio and Inkoo in my search for Pallids, but limited to short trips, I haven't been able to put in any long stake outs of the usual sites. Nonetheless, I'm surprised I haven't connected with more birds, as usually this route will have several Pallids at this time of year.  Arriving at Myrans on Friday evening, several birders already in situ informed me that they had little luck with any interesting raptors. N
Read more