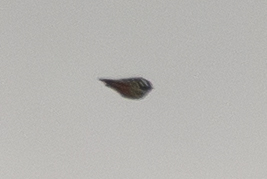 It's been a busy Autumn with a few birds of note.  One of my smaller patches, Suurpelto in Espoo, produced a flyover White-Backed Woodpecker which I was well impressed with. Combined with a male Grey-Headed Woodpecker in the reedbed for some reason brought my list of woodpeckers at this site to 6. White-Backed Woodpecker - a nice ID if I do say so myself The garden also produced the goods, with the first ever Lesser-Spotted Woodpecker visiting the feeders (they visit the garden daily, but we've never seen them take food before). This male has now come in regularly. Lesser-Spotted Woodpecker A male and female Grey-Headed Woodpecker are a daily feature. Greater Spotted Eagle has become a pretty regular winter feature in Kirkkonummi these days, surprisingly.  I managed to catch up with the bird at Salfjarden where it showed very well for a number of birders present. Greater Spotted Eagle  I also made sure to get my eyes on the first Hawk-Owl of the winter, a bird near Lautasaari,
Post a Comment
Read more

Have spent the past few weeks enjoying various influxes of prime species.  SE winds brought a huge influx of Red-Footed Falcons to the Nordics, with some 1,825 juveniles alone (not counting other age groups 😯) having been found. I cashed in several times, first at Laajalahti, where I saw several in a morning, and even found one, before realizing the enormity of the influx, I raced home for a quick one hour watch from my garden, which successfully produced another juvenile! Brilliant result.  Other goodies included Great White Egret and Honey Buzzards.  Great White Egrets I've twitched one or two since, including this bird at nearby Espoonkartano. Red-Footed Falcon I also managed to catch a bit of Pallid Harrier movement, with 2 juvs down in Inkoo giving an excellent performance. Pallid Harrier - Juveniles  A quick weekend trip up to Hämeenkyrö let me visit Tarastenjarvi dump again. No Caspian gulls unfortunately (my first blank year in quite some time) but lots of Rustic Bunting o
2 comments
Read more
More posts